Davao, Philippines: Making waves as the next prime spot for outsourcing 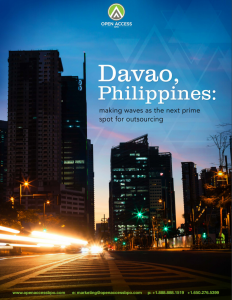 Davao City, Philippines recently secured the 66th spot among hundreds of the world s most preferred outsourcing destinations. It s not surprising, given that it has consistently been cited as one of Philippines Next Wave Cities since 2008. For this feat alone, it deserves to be included among entrepreneurs prospective outsourcing cities. But more importantly, what propelled

DOWNLOAD PDF
Latest studies
Recent blog posts
Do NOT follow this link or you will be banned from the site!