Since moving its operations from the US to the Philippines in 2007, Open Access BPO has developed its portfolio of services and grown its customer base. Along with this growth is its operations’ expansion, including its multicultural workforce and international offices.

Last Friday, July 12, the multilingual call center officially launched a new office at the Glorietta 2 Corporate Center in Makati City, Philippines —its sixth global location, and third in the country. 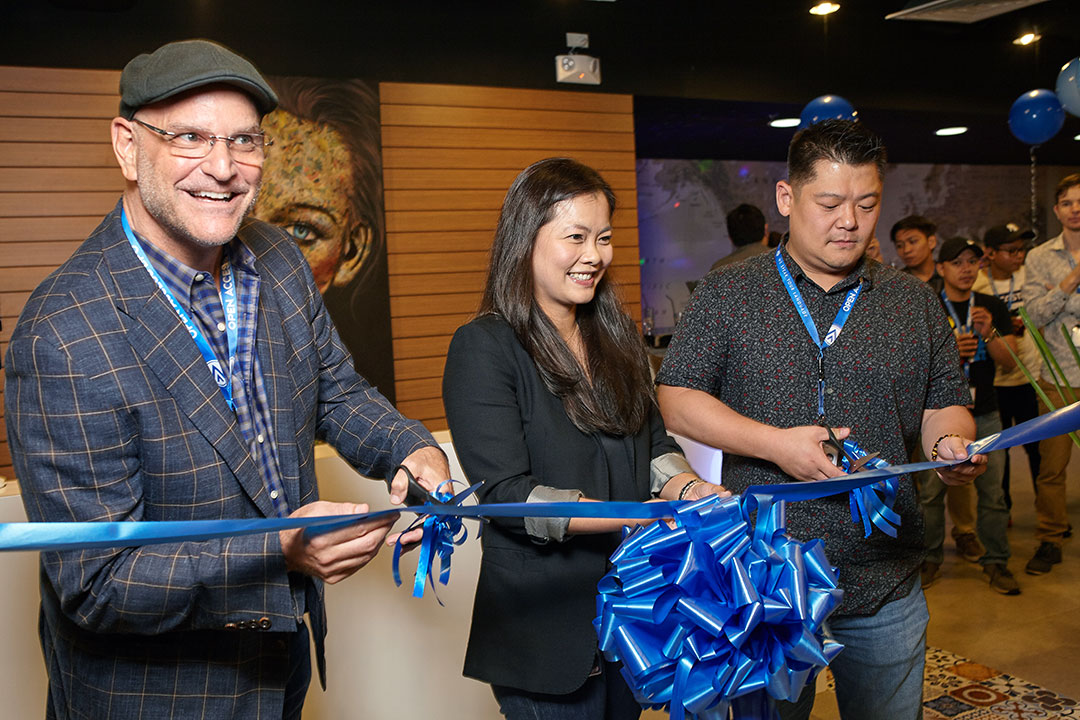 The ribbon-cutting ceremony took place in the new office’s lounge area and was attended by executives, employees, and members of the media. The venue was decorated with blue accents, complementing the strong vintage-industrial theme of the interior. To give a little entertainment for the guests, the company installed a mobile bar and a photo booth.

The ceremony kicked off with an opening remark from Open Access BPO CEO Benjamin Davidowitz. In his speech, he expressed gratitude to the people who contributed in the acquisition of the new space. He also emphasized how the current success offered the company opportunities to scale and evolve.

Company President Henry Chang then prompted everyone to raise their glasses for a toast. The two executives were soon joined by VP for Global Operations Joy Sebastian who officiate the ceremonial ribbon-cutting.

In a statement regarding the any possible expansions in other locations, Davidowitz confirmed that the company will mainly focus on their progress in Davao where one of Open Access BPO’s campuses is located.

“In terms of opening in any of the provincial cities, we’d most likely put our efforts in Davao.” he clarified. “Right now, it would be the only progress we’d consider.”

When asked about sustaining a healthy workplace, Chang shared how the company maintains a laid back and inclusive culture that helps create a comfortable space for everyone.

“The biggest difference is the people. Your environment is what you make of it,” he explained, “And in terms of hiring talents, it’s not just their work ability, but their personality and how they fit in with everybody else. So, the core— the foundation—of having a non-toxic environment, it’s the people, how they interact, and how we build the culture within the company.”

Further down the program, the company also revealed that it has recently undertaken a brand refresh to better create experiences for its clients and website visitors.

The company introduced it new logo, website, and slogan. The new logo, which was a combination of blue and gray, emphasizes the company being a trusted global brand, while the new website features a straightforward layout and a streamlined design that makes navigation easier for users.

On the other hand, the new slogan, “We Speak Your Language,” characterizes the company’s multilingual capability and the scalable nature of its business solutions.

To this, Davidowitz commented, “It says it all.” he said, “Regardless of what language you’re trying to target, we have it. We speak your language.”